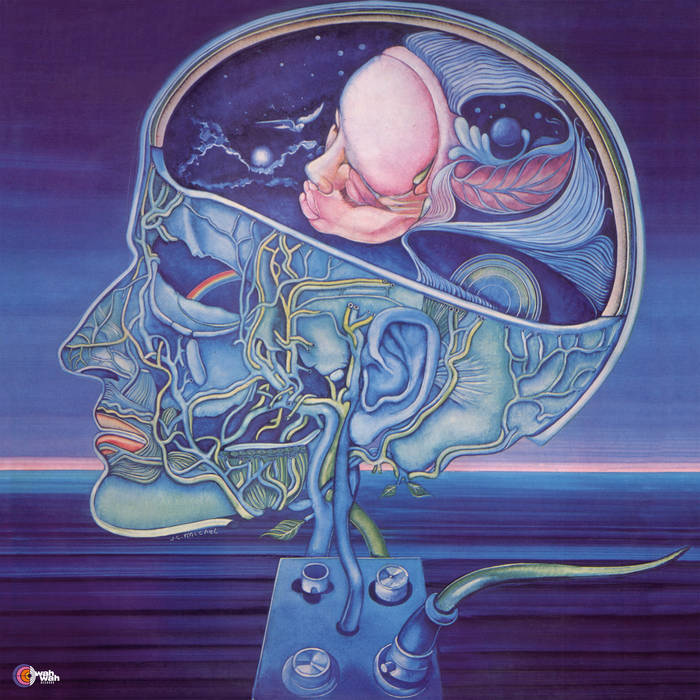 Cyrille Verdeaux is a classical trained keyboard player who plays organ in Babylone, a band from the Rock pas Dégénéré collective, related to the Actuel magazine, at the beginning of the 1970’s. In 1972 the band splits and Verdeaux joins Barricade for six months. In 1973, Cyrille records a demo of one of his own compositions for piano. Actuel’s music journalist –who also plays bass in Dragon- Jean-Pierre Lentin suggests Verdeaux shall send his work to the new-born UK label Virgin.
That same year 1973 Virgin has just launched its first release, Mike Oldfield’s Tubular Bells. It becomes a top seller very fast, helping the consolidation of the project led by future millionaire Richard Branson, and with the good taste of his partner Simon Draper, Virgin will start to add other delicatessen to a catalogue that will have no equal in the history of underground music.
Through Tim Blake, Gong’s synth player at the time (one of Branson’s first artists), Cyrille Verdeaux signs for Virgin in 1974. That same year Clearlight Symphony is recorded (clearlight stands for a type of LSD). For its recording sessions Cyrille uses two different line-ups, each in charge of each of the two parts of the work. On one side there’s ex Babylone members Christian Boulé, Lard Free’s Gilbert Artman and bassman Martin Isaacs. They record along with Verdeaux on Virgin’s Manor studio. The other side will be canned at Kaleidophon studios, ran by White Noise’s David Vorhaus, where Cyrille is joined by Gong members Tim Blake, Steve Hillage and Didier Malherbe.
Verdeaux’s original idea was to feature the Manor studio recordings on side A, but thinking heads at Virgin thought better to flip sides to make more profit of Gong’s commercial success. A curious decision, since you normally don’t promote an LP with the same strategy you would use for a single! Clearlight Symphony was released in 1975 with small echo in press and public, although it has nowadays reached a cult status among followers of the symphonic – cosmic – progressive genres.

In what refers to its musical content, Clearlight Symphony is a completely opposed concept to that of the other project in which Verdeaux was involved at the time: the collective album Delired Chameleon Family (also reissued recently on Wah Wah Records), a brilliant psychedelic dive into the French underground of the seventies. Clearlight Symphony, instead, is a much more author-controled work, where all the musicians adapt themselves to Verdeaux’s circular, systematic composition. The alleged and collected improvisations, dissonances and atonalities (superb Boulé), the rhythmic tension of Artman’s enigmatic, Heldonian drumming, Blake’s environmental VCS3 modulations, Hillage’s content cosmicism, Verdeaux’s crescendos and counterpoints… Plus echoes of Débussy, Terry Riley, Soft Machine, Magma, and why not, the aforementioned Tubular Bells. In short, a work of honesty, an album of its time.