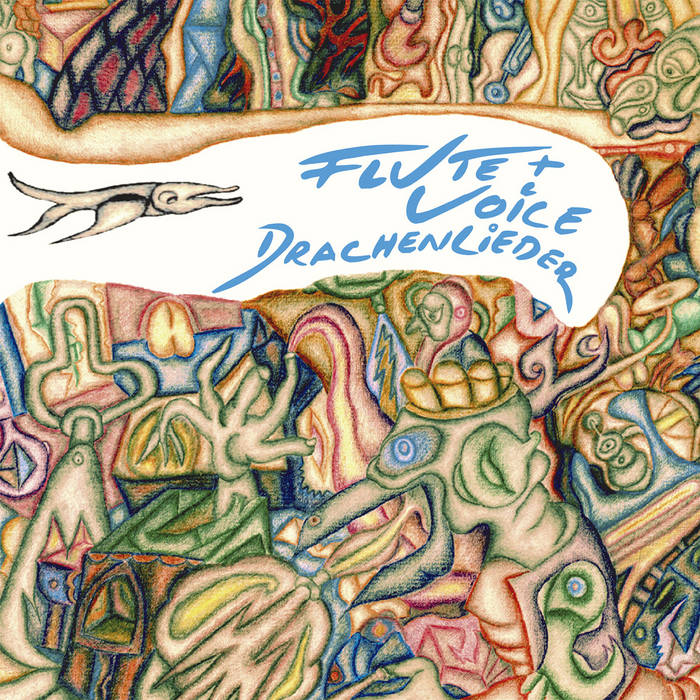 Formed by multi-instrumentalists Hans Reffert ('Flute') and Hans Brandeis ('Voice') in Mannheim in 1969, the Flute & Voice duo discographic debut was issued on Pilz that same year. Their second album was originally recorded in 1973, but it remained unreleased for 22 years until Jack Wieber Records issued it on CD in 1995 as part of a 2 album CD (along with Imaginations Of Light) and now available on vinyl LP format through Wah Wah. But some more material was composed in 1974/1975 and recorded, albeit never going further than the demo stage. Those old tapes showed a further evolution from the previous recordings. They had, of course, the same basic concept, but more intrincate structures and technical challenges were taken. When Brandeis and Reffert met in 1995 to prepare the reissue of Flute & Voice plus Hallo Rabbit on CD they rescued these tapes and thought of chosing the best tracks to re-record them in a proffessional studio. This was done between February and June of 1996 and the results conform Drachenlieder, an album that does not pale in comparison with its predecessors, and one that you wouldn't have thought it was recorded in the nineties if we haven't told you as it keeps the excitement, feeling and sound of their 70's recordings.
"We were on a continuous search for something “new.” “This guy is cool, he’s got it...” or “That one is uncool...” were the two main criteria for us to distinguish two categories of musicians: the inventive, artistic creators of new sounds and the success-oriented plagiators of “commercial” mainstream music. Rarely did we accept other musicians as birds of the same feather, like e.g. the Scottish Incredible String Band or the American Oregon Ensemble – sometimes, but mostly never." (From Hans Brandeis website)

"It was our goal that all our musical compositions should differ from each other as much as possible. Therefore, we adopted elements and ideas from most diverse music traditions and styles – at that time, just like today, an attitude completely opposed to commercial interests." (From Hans Brandeis website)

"For special stage performances and recording sessions, musicians from very different lines joined us: soul and jazz saxophone player Thomas Böhmer, the Indian tabla player Bal Kulkarni who also had played with the Beatles sometime, Ron Martin, the black percussion player from the States, cellist and drummer Clemens Schuster and violin player Dorle Ferber, to name just a few."
Fans of Magic Carpet, King Crimson's In The Court Of The Crimson King, Third Ear Band, Kalacakra, Oriental Sunshine, Bobby Callender, Clem Alford, Kali Bahlu or the "sitar side" of Popol Vuh will enjoy this one!
"Our approach to music as well as the content of our song lyrics of that time clearly reflected the zeitgeist of the late 1960s: a growing awareness for the social aspects of music and the responsibilities of musicians, hippie values, mind-expansion... Regarding the music, however, we consistently fell between all stools: the jazzers would say that our music was rock, the rockers would regard it as jazz; the folk people considered it as avantgarde music, the avantgarde musicians, however, stated that “now – this is really nothing but pure light music,” and for the musical entertainers, finally, it was a “noble (but lost) art” – for many a one, our music was just too complicated, for others just too naive... Our concept, therefore, was more a kind of “anti-concept:” not wanting to move from one point to another, but to expand from one point into all directions." (From Hans Brandeis website)

"Compared to the general standard of central Europe, this is most remarkable" (Volker Kriegel said after hearing the duo play).
Krautrock meets world music, heady psychedelic jazz, ethnic explorations. As you can imagine, the band's sound is unique and unlike anything else you've heard, but it will appeal those into artists such as Magic Carpet, Oriental Sunshine, Saddhu Brand, Mick Softley's Sunrise LP, Bobby Callender's Rainbow LP, Sagram, a.o.