Dreaming The Magic Of Your Maya

by Princess Flower And The Moon Rays 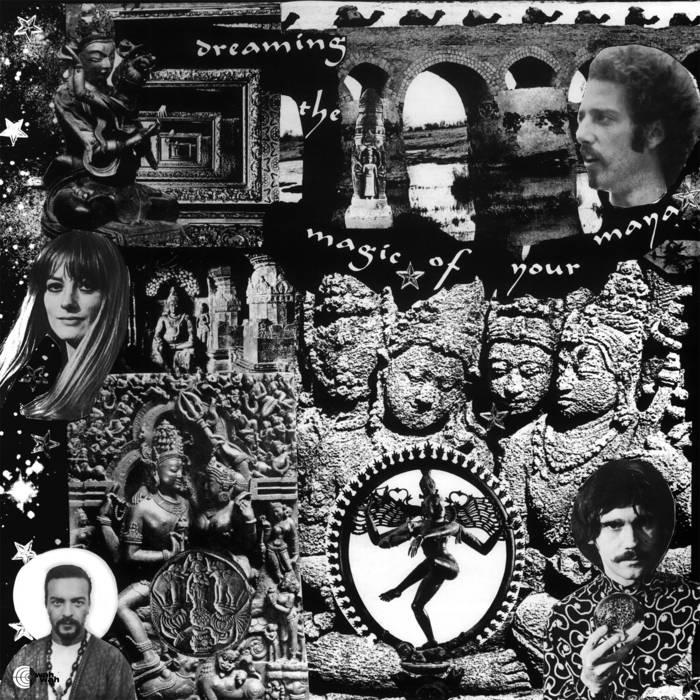 Recorded in 1968 and issued as a very limited run private pressing this psychedelic raga freak-out is the brainchild of multi disciplinar artist Loren Standlee plus his partner Ziska with the cooperation of Daevid Allen and Gilli Smith in what was an early incarnation of Gong. Loren and Ziska had been involved with the crowd of avantgardist free thinkers that settled in Formentera in the sixties, and back home in N.Y. they had also been connected to experimentalists such as Angus Maclise, Marian Zazeela, Tony Conrad, Henry Flynt, Pandit Pran Nath, a.o.

This bizarre selection of sounds was the brainchild of Loren Standlee and Ziska and features a very early Gong incarnation. Loren Standlee and Ziska were among the "Formentera" (small Island near Ibiza, Spain) visionary poets, musicians and psychedelic ‘researchers’ in the early sixties. In Paris, they began hand-painting silk and designing clothes for many of the rock luminaries of the time, among them The Beatles, Rolling Stones, and Jimi Hendrix, as well as haute couture designers in Paris and London. They met Daevid Allen and Gilli Smyth at a poetry reading where Loren was playing Alto Flute and Ziska was creating vocal sounds to intermix with the flute. They began playing together as a group utilizing Daevid’s Italian echo chambers and soon they had a two-night-a-week gig playing at the Vielle Grille, an avantgarde club in Paris where you might hear Ornette Coleman playing upstairs or see Yoko Ono performing in a sack on stage.

Gong was formed and took two identities: one, only Daevid Allen and Gilli Smyth’s material, and the other, the Gong sound of Daevid on ‘space’ guitar, crystals, feathers and other unpredictable objects, Loren on alto flute and jews harp, and Ziska and Gilli doing ‘space whispering’ chanting sounds which built up to sound climaxes. For the time, it was extremely avant guard, and culminated in a gig to perform at Diane Von Furstenberg’s wedding where the group took LSD and both shocked and beguiled the party by performing for two hours, dressed in Loren and Ziska’s hand-painted silks and making sounds that no one had ever heard before. It put them into a kind of cult status.

They were invited to perform at the Museum of Modern Art in Stockholm in 1967, where they once again stunned the audience with their not-heard-or-seen before sound and look. The great Don Cherry joined them at the end of the performance.

Because Daevid and Gilli had visa problems, they couldn’t return to Paris, and the group split up after Stockholm. Gong was re-formed elsewhere with new people. Loren and Ziska returned to Paris and then left for New York. In New York, they met Ira Cohen, poet, mylar photographer, and the creator of the cult classic film The Invasion of Thunderbolt Pagoda. Quoting from Ira Cohen: "Sheldon and Diane Rochlin had just finished their great film on Vali, the witch of Positano, and were working on (their next film) Dope. Loren Standlee and Ziska, who had been in Dope, stepped into the magic mirror and became charter members of the "Universal Mutants". It was then that I realized we were a special group of dedicated visionaries, electronic multi - media Shamans…"

Two of the tracks on the bonus LP, feature the line-up of Loren, Ziska and Raj Samyana, which is basically The Universal Mutant Repertory Company minus Angus Maclise and his wife Hetty.

The Universal Mutant Repertory Company are most known as a group that included drummer Angus MacLise, multimedia avant-gardist who was the original drummer of the Velvet Underground. The Company were formed in the late 1960s, and included MacLise, his wife Hetty MacLise (on organ, tanpura, and probably other instruments), Loren Standlee (alto flute), Ziska Baum (Indian dulcimer), and Raja Samyana (guitar). The Universal Mutant Repertory Company was a name devised by filmmaker Ira Cohen, to describe the people appearing in his film Invasion of Thunderbolt Pagoda. All of the musicians did an improvised soundtrack to that film at St. Mark's Church in New York. A 39-minute tape of the performance, used as the title track, formed the core of the Angus MacLise retrospective CD collection The Invasion of Thunderbolt Pagoda. On this piece, the group played drone-trance music propelled by MacLise's charged hand drumming, given extra psychedelic coating by the employment of four microphones, each run through an echo chamber. Loren Standlee recalled in The Wire magazine that the musicians would play together for as long as eleven hours straight.